Some people has asked questions (Q) related to Jääportit band, music, works and other stuff. Here’s some of them with the answers (A) written by Tuomas. If you have other questions on your mind, send it via email to jaaportit@gmail.com.

Q: What is the meaning of your monicker Jääportit?

A: Jääportit means The Gates of Ice or more freely translated The Frostportals. This name came to me one night in 1997.
– Ice and frost represents the coldness within and the coldness without oneself.
– The Gates are about something pompous, a place where you could enter, a place where you haven’t been before. Also read the question about the logo & symbol at the bottom of the page.

Q: I assumed you are Jääportit; is there anyone else involved?

A: Yes, this is one man project. Few additional members has been involved during the years:

Q: Would you be interested to perferm live at our party?

A: Well no, because this project has never performed live and propably never will. 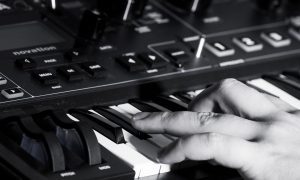 Q: What kind of gear you use in your studio?

A: Mainly I use synthesizer, guitar, bass and music software running on a digital audio workstation. I program all drum beats and percussion. Occasionally melodica, flute or other random instruments have been used also.

Q: What’s the best place to purchase your albums?

A: There’s few personal copies of some albums left, check out more info from the Jääportit Web Shop.

Q: I am interested in distributing some copies of Jääportit albums. Do I have to contact your label, or can I go directly to you for wholesaleprices?

A: You should take contact to label boss, Martin at Epidemie Records, to get the wholesaleprices. Contact him via email to info@epidemie.cz

Q: I would like to buy ‘Kauan koskematon’ album, where can I get it and was it really published as a cassette?

A: Yep, Kauan koskematon album was published as 500 copies limited edition of cassette tapes. At first record label’s original plan was to publish it as CD or CDR, because of money issues they ended up releasing it on cassette at the autumn 1999. All of the cassettes were sold out in about a year. Therefore it’s not available anymore, except maybe on second hand stores sometimes. Album was re-released as CD in August 2018.

Q: Is it possible to get a copy of ‘Halki lumisen metsän’ CDR from you please, as I really want to hear it?!

A: All copies of the original demo CDR have been extinguished ages ago, so it’s not available anymore, but now you can get it as Kauan Koskematon / Halki Lumisen Metsän CD released in August 2018.

Q: Let me ask you something, was there any one thing in particular that inspired the creation on song “Maa pirstaleista”? I think I remember reading somewhere that you were inspired by glaciers and other things of the sort (not for this song in particular, but overall).

A: For the creation of the track Maa pirstaleista I got inspiration from the melancholic feelings when it seems like the earth under your feet starts to brake down and there’s nothing you can do about it. Only thing left is the fragments. Glaciers reflects more the meanings behind the name of the band and overall feelings behind all of the tracks.

A: Track Pois muodot huuhtoo (Leaching Shapes Away) deals with the water elemental. Natural ambience was created from the field recordings at Ainola Park in Oulu, Finland.

Q: Can you give me more details on that Lovecraft compilation?

A: It includes one special and extended Jääportit track titled Kuihtuman henkivi. Lovecraft themed compilation album titled as YOGSOTHERY – Gate I: Chaosmogonic Rituals Of Fear was released by I, Voidhanger Records, November 15th, 2010. 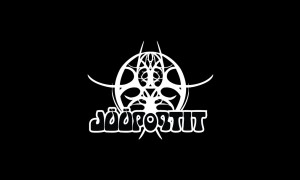 Q: What your logo represents ?

A: Well, this Jääportit symbol, that I once created , is supposed to represent same things as the band name: it’s a portal between this world and the frosty depths of unknown dreamspheres. There’s an alien look-alike person with triangle between the eyes and above him is branches of trees and a gateway. All this is covered in a circle with thorns that protect it against unpleasant surprises and uninvited visitors. All in all there’s a lot stuff going on in the symbol and everyone can freely discover meanings of their own for it.

Q: One thing caught my attention: why everything blue? What does this colour mean to you?

A: I like deep dark blue and ultramarine blue colors. I guess it’s the color to express who I am and how I think, see and experience this world around me. I’ve read that its a color that express melancholy, tranquillity, coldness, night, ocean and sky. Those things matters to me and I think can be heard in my music too.