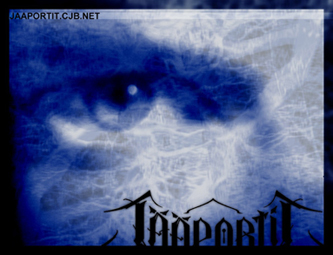 Let’s start with the subject most interviews are started with: a history of yours, since it lies in shadows before me.

– Jääportit have existed as long as I have but the musical form of it borned somewhere at the autumn of 1997. I just started to compose music that sounded quite different and strange to me. Then I heard Mortiis. He had done music about trolls and something that interested me too back then. Mortiis and other music such as Burzum, inspired me to do more music and I got my first release “Halki Lumisen Metsän” ready at the winter of 1998. It was self-published CD-R, limited to 50 hand-copied pieces. Suprisingly all of them are sold out. Well, music sounded maybe too much like Mortiis-copy, but it was a start anyway. Normendahl, main-pervert behind Noitavasara distribution, liked it much and he suggested me that they could publish a full-length album as real CD. Money-problems ruined CD-plans and we decided to release album as cassette. Album got name “Kauan koskematon” and was out at the end of summer 1999. It sounds like something different than the first release and contains deeper emotions and soundscapes. Still it isn’t even near perfect album. Noitavasara have sold out all the 500 copies of cassette which is quite a suprise when thinking about selling of cassettes these days.

While listening to “Kauan Koskematon”, one has the feeling to go through a novel divided into different chapters…

– You have found my point. It’s kind of a story that begins with a death of man. Beginning of the story have been written, rest of the it can be heard and figured out by yourself from what do you hear. At the begin man is outside the icy gates in the forest. He hears voices that makes him want to access inside the gates so much that he commits a suicide, only way he finds. Gates are open and rest is yet unwritten.

You have also a mini-CD out. Could you please enlighten us a bit regarding this subject? When should we expect a full-length CD?

– Yes, first release was “Halki Lumisen Metsän” Mini-CD which contains seven songs. Original version of song called “Hänen Jäätävä katseensa” was on this one. Music is quite simple with dark and primitive feelings. Some song are still available as quality MP3-files in internet. It’s hard to say anything about full-length CD. It might be that I will do enough music for full-lenght at the winter of 2001. At this winter, 2000, I just haven’t got time, or inspiration, more than four new songs. These four songs creates a background for a short story I wrote for the background of the music. Unfortunately I haven’t got enough time to mix those songs so I can’t even say when new release will be out. Hopefully at the autumn 2000.

How’s work going with Noitavasara Distribution? Would I be wrong naming them as your current “label”?

Why do you keep doing all the lyrical part (song titles, spoken words) in Finnish? Anyway, I’d like to get acquainted with the principal idea behind JÄÄPORTIT is there’s any.

– Finnish is the language I practice every day and that’s the main reason why I use it. English is quite used language and I don’t even speak or write it perfectly so it’s easier to work with Finnish. I think Finnish is quite special language because there is only something like a bit over 5 million people speaking and understanding it.

Do you think the experience you have acquired along the last couple of years has given you an increasing freedom, an easiness to assert your personal identity?

– When I do music it’s much something like writing diary but nothing near it. There’s my feelings from my life at that moment I wrote that piece of music. Music captures the moments of life in many ways.

Do you believe in any supernatural beings? Generally speaking, are you a superstitious person? Have you ever practiced anything “abnormal”, so to say?

– There’s always something abnormal in my everyday life and on the other hand, nothing that special. I believe in ancient spirits, that lives somewhere deep in the forests, lurks in the shadows. Some of them are evil, ready to harm living people and when I walk alone in the cold winter night, they surround me. I beg them to attact me, show themselves. But nothing happens. Winds, their whispers, blows in the woods like always. Suddenly I realize I’m home, inside, and they’re gone. Was it all just a illusion, creation of sub-consciousness? Atleast there’s another source of inspiration.

Are you in need of any special circumstances in order to compose anything?

– Loneliness and silence. Special moment when music is to come. It’s possible to create music every day but mostly it’s just shit. There’s nothing special in it. Mostly it’s diffcult to say when the right inspiration is on.

The northern countries’ nature seems to be a source of inspiration for quite a lot black metal / dark ambient acts; especially the wintertime. What about you and what does winter represent for you (judging by the “Kauan”-cover and layout, I guess I may reckon you to the acts mentioned above)?

– For me, and the music of JÄÄPORTIT, winter is one source of inspiration. I don’t even try to compose JÄÄPORTIT music at the summer. It’s impossible. I begin at autumn and end at spring. Winter-time something cruel and somehow very inspiring. There is no light, no joy of living, nothing but ice, snow, freezing coldness.

What changes in the music industry have caught your attention most during the ’90s?

– At least the development of computers have changed the music business a lot and will change more in the future. MP3-technology and all kind of piracy makes record-companies cry on their knees because they are losing big amounts of money all the time. That’s good. Maybe few years from now there will be no CD-format at all, or it changes to be something like LP’s are these days. I don’t care. I don’t have need to make money with my music. I make music for myself. To survive.

Could you live further, once becoming a crippled man (due to some kind of accident or alike event)?

– Interesting question. It would depend on the wounds. Most of the time life is hard enough even as what it is today and after accident it would turn to be much harder. I must say I don’t know. Maybe I could, maybe couldn’t.

Do you know anything regarding Russia? What is your attitude to the country of mine as well as it’s people? Any Russian bands you’ve heard lately?

– I’ve visited once in Russia. It was at the autumn of ’98 when we did a one week trip to Russia and Estonia with my school. We visited in St. Petersburg and slept over nights in some side-town near it. Buildings were quite ruined-looking. Tobacco, beer, booze and pirated music albums were very cheap. It seemed like Russia was behind Finland in technology. It was obvious that there’s two kind of people: the one’s who have got a LOT of money and the one’s who haven’t got money nearly at all. Actually I haven’t heard that much any Russian bands, at least I can’t mention any by name.

Closing words of yours.

– Enter www.jaaportit.net if you wish.