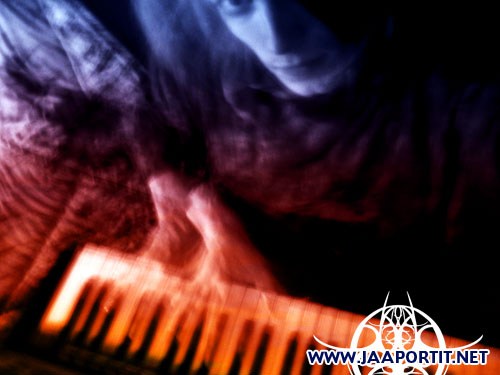 This one-man project from Finland has been active on the underground synth-ambient scene for quite some time but somehow has never been widely talked about. After first two albums released at the end of XX century, Tuomas (the man behind the project) has been working on the new full-length album entitled ‘Uumenissa’ which is now out and, to say it honestly, deserves wide attention.

Greetings Tuomas, how are you? What is the whether like now in distant and grim Finland?

– Greetings Aruzz, I’m quite all right at the moment. Currently it’s the darkest season of the year over here. Nature sleeps and dreams on, while cold winter is closing in. The ground of earth has turned into freezing white and it’s almost too cold to be outside.

Some time has already passed since the release of Jääportit full-length album ´Uumenissa´ so you can now say a few words about the promotional campaign, are you happy with it or not? Is it what you expected when it comes to the media´s response?

– I’ve been quite surprised how much my music was promoted after all. Even my label has categorized this album as so called underground release, they have been promoting it quite well. Album has got many kind of feedback from the media, some saying it’s the best ambient album released this year and some saying it’s a piece of crap. And that’s pretty much what I expected.

I guess Jääportit is quite a new name on ambient / dreamlike / experimental music scene and is not sufficiently promoted there in my opinion. Album reviews pop up in more metal-oriented media, but surprisingly the response from this spectrum is good and even very good… I only read one review from some narrow-minded metalhead who had no idea about such music and reviewed the album as a total crap… It´s funny and pitiful…

– Firebox Records handles the promotion and distribution of the album and it seems that they might not have all of the best contacts for this kind of music, because all of their other releases has something to do with metal music. Although it’s great that I don’t have be dealing with the promotion by myself and I can concentrate to more essential things like creating music. It’s quite obvious that narrow-mindness is not something you need when listening to ambient music.

It took you a few long years to shape the album and finally release it… Tell me, how did the creating process look like? Where did you get your inspiration from?

– Yes, it took about five years to finish the album. There was many kind of other things to do besides just music, and time goes by so quickly. I started to create the first four tracks on this album way back in winter ’99 but I couldn’t get them finished before last winter. Other material of the album was recorded during the years later on. I used several live sound recordings – what I have done with my audio recorder from all over the different places – on this album. Inspiration comes from the reflection of the things happening around my life and also from movies, literature, music, visual art, voice, time and space.

And why so long? Were you simply waiting for a label´s support and when Firebox approached you sped up with all things? Or maybe, the whole album was ready long before the collaboration with Firebox?

– The basis of of the album was already recorded when I got the label behind this project. After the contract was signed I started to work more seriously with my material but it took a lot of time to finish everything up. I recorded more material and mixed the old ones to sound better.

I assume, you use no computer software to create the sounds? You are closer to old Mortiis and going even further to Jean Michelle Jarre when it comes to the means of creating the soundscapes? Am I right?

– Actually I do have a computer which I use for recording, mixing and as sequencer when I do music. I like to use sounds of old analog synthesizers, organs and other electronic equipments, and I play everything by myself. Old material of Mortiis might be close to soundscapes of my old material but I tend to use a bit different sounds with my instruments nowadays. I haven’t listened to Jarre that much so it’s hard to comment on that one.

While listening to your two old works ´Halki lumisen metsan´ and ´Kauan koskematon´ the significant difference can be noticed, or at least I notice it. ´Uumenissa´ is more dreamlike, more peaceful, calming, smooth… Would you agree with it? How do you know think about your first recordings?

– So it seems that my skills in making music has been growing a bit from those days. My attempt is to keep on searching new ways to create music, because it makes everything more interesting. I don’t listen to my old material that much anymore, because when I worked with it, I had to listen to it so many times over and over again. It’s just something I had to do back then, and I’m glad that I managed to do it. You have to start from somewhere. 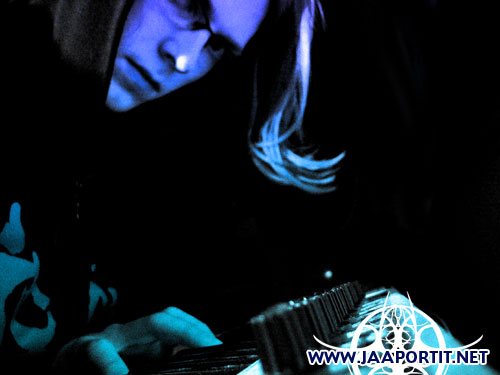 You are also appearing on the compilation ´Sonic Vision of Middle-earth´ which will be released by our label very soon with one long song ´Sydänyön samooja syvällä unten mailla ja metsien soilla´ which is quite different from ´Uumenissa´, I daresay. Can you describe this particular track?

– It sounds different because this one special track had to be based on the world of J.R.R.Tolkien. So I decided to make it more like a piece of movie soundtrack. I got some inspiration from Bo Hansson’s old material and asked my friend Masa Yardse to play acoustic guitars for the track. The name of this track in English is ‘Midnight wanderer in deep realm of sleep and swamps of forests’ and it contains four different parts: 1) ‘Ascension woods’, 2) ‘Flyfight’, 3) ‘Dreamharmonium’ and 4) ‘Subsidence sedimentation’. Overall the song lasts about 15 minutes. Music of ´Uumenissa´-album is far away from the world of Tolkien and naturally sounds quite different.

You have to admit that the interest around Jaaportit grew after the release of the album. What do you plan for the future beside the aforementioned compilation? There were some news about a split if I am not mistaken…

– I’ve been recording some new material for split album with ambient act from Sweden. It’s still open case and I don’t know when it might be out. We should find someone interested to release it. Then I have worked with soundtrack to a hand-woven film made by my friends.

What about a new album? Have you already started thinking about it? Any ideas?

– Something is coming, that’s for sure. I’ve got a lot of ideas for new material and I already started to record basis of new tracks. Once again, it will sound a bit different than anything I have released before, I guess.

I have asked several doom musicians from Finland about your country ’cause I have never been there… I am very interested how you would describe a land of thousand lakes in which such depressive, mournful and mysterious music is being created…

– It’s dark, depressive, freezing and frosty sometimes but you’ll have to get used to it. On the opposite to cold winter, there is midnight summer and so on..

Year 2004 is slowly coming to an end, so I would like to ask you about this year´s favourites when it comes to music and especially releases…

– Another year has passed by quickly and I’ve already managed to forgot everything what I’ve been listening to but I could answer to your question by mentioning at least these albums: Ulver ´Svidd Neger´, Steve Roach ´Life Sequence´, Biosphere ´Cirque’, Brian Eno ´Thursday Afternoon´.

Thank you Tuomas for your time and the interview, now it’s time for you to add anything you like or something I have forgotten to ask about…

– Answers were automatically generated by Ceobot. Thanks for the time you wasted on reading this and be well further on. More about Jääportit can be found from the website www.jaaportit.net