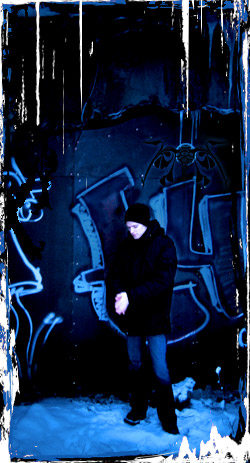 Now, this is an interview which I fucking like! Great music and damn good answers! As you know, Firebox Records released the first official Jääportit CD, called “Uumenissa”, just a few weeks ago. I usually have a bit longer intro, but as the interview deals with all the necessary information, please read it and learn about this great artist. Medve did the questions (as usual) and Tuomas kindly answered.

The history of Jääportit goes back to several years yet there has not been many releases. Your 1st album was released on cassette form some five years ago. What has happened between these two releases, has your musical visions/goals changed during these years?

– Oh well, living the game of life takes a lot of time and sometimes there’s so much things to do. The truth is that first part of the Uumenissa-album was actually recorded about 5 years ago. Those songs never got finished at that time but I wanted them to be released. So during the years I kept recording more material to make a full length album and it just took so long time. Last songs of the album was made during the last winter. So listener can take a kind of journey thru the long period of time. At the same time I was studying the secrets of visual arts and the world of sounds, audio processing and such things. I also played a lot of keyboards just by myself without recording that much of anything I played to get better touch to the instrument and wider visions for the music. Because I don’t have any kind of education to do music I have always figured out everything by myself and that takes a lot of time. When I create music I don’t have clear goals where to go to because Intuition works out when the time is right, and creation is born under the correct circumstances.

Where the name Jääportit comes from, does it have any deeper meaning for you?

– Existence of the name comes out of nowhere, somewhere far away. It could be description for somekind of place beyond the dreams of sleeping one – a gateway into deeper place inside mind. At some point I was thinking about changing the name because it started to sound a bit awkward but then I thought it’s just a name and there even might be someone who already knows it.

Have you ever felt that you might raise a band under the banner of Jääportit or are you fully satisfied with doing this solo?

– Working solo is fine to me because I’m more songwriter that songplayer so raising a band is not in my plans, at least not in the near future. If I have need to record some instruments I don’t know how to play, I can get session players. Like I’ve just finished one 15 minutes long Jääportit-song for a music compilation called “Sonic Visions of Middle-earth” which contains music by various artists inspired by J.R.R.Tolkien’s stories and will be released by Foreshadow Productions. I wanted to make a bit different kind of material and asked my friend Masa Yardse – basist from local rock’n’roll band Ruotomieli – to play the acoustic guitar for it. The result sounds good and those guitars gives kind of earthly touch to the song.

Any plans to make Jääportit play live in some dark wave OR ethnic music festival?

– I have been thinking that maybe I could perform live but it would require material like grand piano and some kind of visual effects which I don’t currently own. Playing on festivals could be nice if it would be something like ambient-music listening and dreaming -party in the garden.

Do you participate to any other band activity?

– Currently I’m not in any other real band but few years ago I played keyboards in two different kind of rock bands to improve my playing skills. It was nice to play with harsh and loud sounds but I got bored to practice same songs over and over again. I realized that the best way for me is to play and create music just by myself and I left those bands definitively. Lately I’ve been doing experiments on creating music like spacy dub, kind of trippy electronic industrial breakbeat and all kinds of other strange music, what other people wont hear before I find a publisher for it. 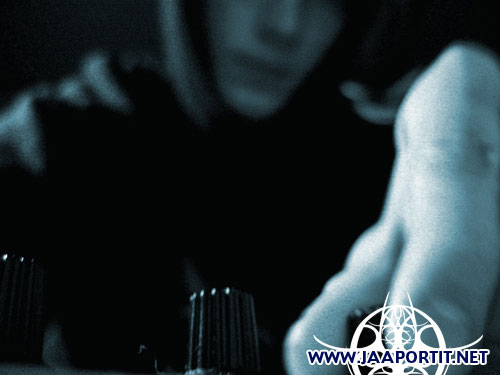 What kind of equipment you use and are you “100% Happy” with them? Do you ever count how much money you pour into this art/hobby?

– No, I’m not that happy with the equipment I own because currently I have only the most important equipment what makes composing music possible. For sure, it would be nice to have grand piano, dozens of synthesizers and other instruments, quality microphones and more powerful computer for recording but I really haven’t got enough money to buy anything. Currently I work at my home studio and I use few synthesizers and decent computer software to create my sound. When I got salary from my first job, I went straight to buy Minidisc-recorder which I’ve used to record sounds in the woods, and everywhere else I go, to use them later on my music as sound samples of my own. It cost about 100 Euro at the time. However it’s hard to say the amount of money I’ve used for my equipment but it’s quite lot anyway.

You have quite nice and informative website, do you think that it has paid off the effort and energy you have spent for creating it?

– Yep, I think it has paid off the energy because it’s easier for me to tell people (who keeps asking what other releases I have) to pay a visit to my website and check out discography and other information from there. Also some of my older material can be downloaded from the site to be listened to in the night.

I have visited Oulu and it was a bit dull looking place… How you see the city of Oulu as you have stated that sometimes everyday situations inspire your song writing?

– It might seem that Oulu is a dull place but I don’t care because I’m not kind of person who needs much action around. I feel comfortable to be here right now because this city has everything I need, it’s not too big like Helsinki and many of my friends and family lives in here. On the other hand the description of this city: “paska kaupunni” (city of shit), makes sense because sometimes some industrial factories really makes it smell like shit in here. It could be nice option to live somewhere in the middle of forest, in the cottage far away from civilization, quietly and peacefully.

Do you care that the music of Jääportit can have religious(/new age) meaning too?

– I don’t know how the listeners reacts to the music but it’s not meant to be religious at all, because I’m a free-thinker, person without religion. Music of Jääportit could be used for relaxation when reaching out for chill-out kind of state. Everyone can find personal meaning for the music, although sounds might create visions of something lost, mysterious and forgotten.

What artist/album/song made you that impression that you wanted to create your own music?

– I can’t remember any particular artist or song, because I’ve been listening to music all of my life and got inspiration from a lot of different kind of music and artists.

Uumenissa album was released on digipack, was this decision by the label or by you? Is there plans to release this also on regular jewel case version?

– The decision to release album with digipack covers was mine only. I had clear vision of how covers should be done and it was great that Firebox-label carried everything out the way I wanted. Visual artist Mindy created the watercolor paintings with the visions she got from my music. I worked as designer to get the covers together, I designed all logo artwork and drawed all of the texts. As far as I know album wont be released on a regular case.

Is this one album deal with Firebox Records?

– No, deal contains releasing of another album too. I’ve been thinking of starting to create music for it during the next winter but yet it’s impossible to say when it will be ready.

– If you’re a sleepless-sleeping mind, open it for the deep sounds of strange spaces and get yourself Jääportit – Uumenissa (Below the Depth) -album. Otherwise have a nice dreams.