From Finland’s finest Doom Metal label Firebox comes a new release that pushes boundaries in this matter. JÄÄPORTIT, a solo project by Tuomas M. Mäkelä has nothing to do with the metal genre at all. The band’s sophomore Uumenissa blends atmospherically electronic music with dark ambient and creates mesmerizing soundscapes. While listening to Uumenissa I was deeply touched and now I just want to learn more about the creative mind and his work behind …

Dajana: Hi Tuomas. You have read the review I have written, that is consistent with all the other ones I read so far as regards content. Did you expect such an overwhelming response? How does it feel and does it have any use for your future?

Tuomas: Hello Dajana. Your positive review came as surprise to me and of course it’s nice to know that someone likes and understands my music. The sure thing is that my label Firebox Records is concentrated to metal music and they seems to have mostly contacts with metal music media. As my music is so far away from metal as it could be, I was expecting only few lousy reviews written by narrow-minded metalheads, who avoids everything what sounds even a little bit electronic. Luckily there has been other kind of response also, like your review. I’m trying to deal with the feedback about my music with neutral feelings and try to keep reviews out of my mind, because they are just opinions of other people and has nothing to do with myself.

Dajana: It seems it did turn out successfully to land a two-album deal with Firebox. But how the hell did you attract the attention of a doom label? And how is it working with them and their support for a band like JÄÄPORTIT?

Tuomas: Actually I’m not so sure how I got their attention, because they took contact to me when I wasn’t even that active with my music project at the time. Although it might have some affect that I had few MP3’s of my early releases floating in the internet and I got quite good response with Kauan Koskematon cassette album released back in 1999. After we signed the contract I started making music more seriously. As a label they are doing their job as well as they can and I can’t think anything negative about them. Current situation seems to be that they are splitting the label in few sub-labels and JÄÄPORTIT has been considered as so called underground band in their category which is fine to me.

Dajana: Workings on Uumenissa has taken around 5 years, buying all these equipment that was needed and getting used to it. You got everything you wanted? You are satisfied with what you can realize now musical wise?

Tuomas: No I didn’t got even near everything I wanted. Currently I only have the most important stuff what I need to create music in my modest home studio but I don’t have enough equipment to play live. I’m trying to collect money to buy new equipment, because I’m always searching for new sounds but the fact is that poor artists like me won’t ever have enough money to buy everything what I want. But who knows, maybe after few decades I might have my own grand piano, soundproof place where I can play it and equipment good enough to record it.

Dajana: Being compared with such musicians as Jean Michelle Jarre, Vangelis and Tangerine Dreams, who are known for their dreamy but sort of cheerful music, your sound has a very dark and cold edge. Was this contrast intended?

Tuomas: Yes, on some level it was. Maybe it’s because I have some sort of roots in making music with dark and melancholic atmosphere and I rarely listen to anything that cheerful. And maybe I’m not always that cheerful guy either. 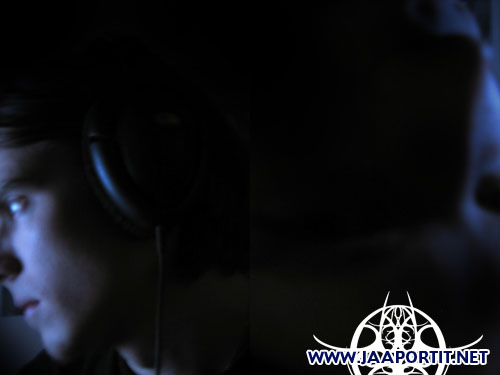 Tuomas: It was meant to be kind of an anecdote to (metal) people so that they wouldn’t think my music as any kind of religious new age-bullshit. On the other hand it refers to the process how I have been learning to compose, create and realize music. As I don’t have real education in music, I’m casting my own spells to realize it the way I want to.

Dajana: You said, you get your inspirations from the life you are living. What does it mean exactly? You get inspired by all these small things that happen every day around you? Special moments? I remember a scene in the American Beauty movie, where the guy from the next door films a paper sheet running with the wind for minutes, banal but a wonderfully silent moment though …

Tuomas: I’ve always been like a silent observer of life and sometimes those little details of life are the most interesting things. Your idea of the movie you mentioned is quite close to the point what I mean. I get my inspiration to write music from memories of the past and from the present time and state of mind and also visions of the future. Though the visual art, movies and literature gives ideas too.

Dajana: Your music has a big “chill out” factor, taming everybody’s mind. I wonder if you have found your inner balance, your inner peace to create such a music that is having this effect to your listeners. Is there a need of having found the inner self creating such a music? If yes, do you have a special philosophy how to reach this level? And if not, what makes you doing this chill out music? Self therapy?

Tuomas: When it comes to creating art, it’s important to know who you really are, without thinking about what anyone else claims you to be. That way you can create something that comes genuinely from yourself. I’m searching for my inner peace all the time. There’s moments when it can be reached and moments when it is lost and hidden somewhere deeper inside. Chill out music is what I do, because it works as self therapy to myself and tames my mind as well.

Dajana: How does songwriting happen? Is there first an idea, somewhat of a concept or let you just flow your mind (and fingers over the keys)?

Tuomas: I’m using varying techniques to create songs. I might began by tweaking up some sounds, lay my fingers over the keys and play something that happens to come out of my mind. If it sounds good enough, I might record a little part of it and then start to create other sounds around it. Then I might add some bass lines or rhythm instruments along, whatever makes it sound good. Sometimes music is born just by improvised playing.

Dajana: What to expect from future releases? Do you have plans and ideas to change your style or to let flow in other and different influences? If yes, what kind of? What can you tell about the planned split CD?

Tuomas: Yet the future is open and unseen but definitely I’ll keep on doing more experiments with the music. During the autumn should be out a compilation album entitled as Sonic Visions Of Middle-Earth from Foreshadow label which contains one 15 minute long JÄÄPORTIT track. The planned split CD with Swedish dark ambient project Mortesium is still under work but hopefully it will be out some day, if we manage to find someone interested to release it.

Dajana: With whom musicians and artist you would like to work together one day, if you ever get the chance?

Tuomas: It would be quite interesting to work with Richard D. James (Aphex Twin – Cal) but maybe it would be more useful to work with some Finnish musicians, who knows about producing electronic music more than I do.

Dajana: You listen to all kind of music, but what has had a bigger impact on you lately (artist, album)? Is there an artist/musician you specially adore?

Tuomas: No, I really don’t adore anyone. Let’s see, lately I’ve been playing a bit of Biosphere, Steve Roach, Robert Rich, Chopin, Hawkwind, Pink Floyd and Ulver around my player but also several others. All the time I’m trying to discover more and more any kind of good music to listen to.

Dajana: What was the most impressing natural phenomenon you ever experienced?

Tuomas: Northern lights, eclipse of the moon and thunderstorms.

Dajana: What magic have northern lights?

Tuomas: Aurora borealis, also known as northern lights, has this very mysterious feeling. It’s one of the nature’s own hallucinations, like a rainbow but much more magnificent because it appears on the night sky and it is moving and changing element. So it’s like watching a movie and sometimes northern lights might even have a sound.

Dajana: What’s the most unusual ”thing” you ever have done?

Tuomas: This is a tricky one because it depends on what is considered as unusual and what is not.

Dajana: How to bring the beauty of Finland closer to me in one sentence?/ What should a foreign have experienced in any case in Finland?

Tuomas: The beauty of Finland comes from beautiful nature, clean surroundings, strong cultural values, and the equal opportunities given to everyone. In Finland foreign should experience sauna, freezing winter and the midnight sun in the summer.

Dajana: Is there a place you would like to go to if there is any possibility that offers a promising source of inspirations?

Tuomas: Best way to find source of inspiration could be traveling around the northern parts of Finland, or Norway, in the winter.

Dajana: Ok, now I’m really running out of questions. Thank you very much for spending time for all these detailed answers and I just hope to hear of you again in the near future with some new music. Cheers!